The Hexpress is a community newspaper for the people of Hexthorpe in Doncaster. It is published four times a year and delivered free to every household. It acts as a forum for issues that concern the community, gives relevant information and highlights good news. The first Hexpress was issued in August 1989. It has appeared regularly ever since. It was first published by the Hexthorpe Methodist Church, then the Hexthorpe Quality of Life Group and now jointly with the Hexthorpe Primary School’s Hexfiles.

Hexthorpe is a community of some 4,000 people. It is situated a short walk away from Doncaster town centre. It has a very long and proud history. It is listed in the Domesday Book in 1085 as ‘Estorp’ – Doncaster did not even get a mention! Eight hundred and fifty two years later the Mallard, built in Hexthorpe, broke the world speed record for a steam engine.
More about Hexthorpe

The Most Attractive Street in Hexthorpe

Have you taken a walk down Salisbury Road this summer? It has been a sight to behold. Hanging baskets and troughs of flowers have been everywhere. Congratulations to the residents for showing such a pride in their street.

Two Hexthorpe residents have contacted us to give their thanks to the Salisbury Road residents. They both urge other streets to follow this example. One of them, April Thomas, says, ” How lovely to see all the hanging baskets and planters in Salisbury Road this year, what a transformation. I hope that this is a trend other streets will follow.”

Could you be the one to make it happen in your street?

There is funding available through the SEE Project that various voluntary and community groups have been awarded in the last twelve months.

There is a grant of £250 available for anyone interested in starting a new group or continuing the work of an already established group. For those that can provide a sustainable activity can apply for funding up to £500.

Residents from Mutual Street and Salisbury Road have recently been awarded SEE Project funding and will continue the upkeep of their local area with the use of hanging baskets, flowers and seeds that have been planted during spring time.

Sharky’s group will plant bulbs and flowers following the removal of shrubbery in the Mutual Street area by volunteers, where they hope to commemorate the group’s founding member Paul Sharp.
The Junction have also had several groups involved including a board game group, arts and crafts and more recently the 25th anniversary celebrations.

Please get in contact with your local stronger community officers if the funding is something you may be interested in applying for. The group should aim to promote community engagement and cohesion among residents and one that is available to all ethnic and cultural backgrounds.

A Great Crowd at the Fireworks Display

A crowd of some 2,500 people were in the Flatts last night – November4th – and the whole evening was a great success. It went off with a bang!

Congratulations to all those who organised it – the Friends of the Park, the local Council Community Team and the many volunteers. It was great to see the park alive again with people.

For some years the Hexthorpe Primary Academy has produced the Hexfiles - giving news about the school - to pupils, parents and friends of the school. It is now published alongside the Hexpress and is delivered with it to every Hexthorpe household. This strengthens the existing link between the school and the local community. 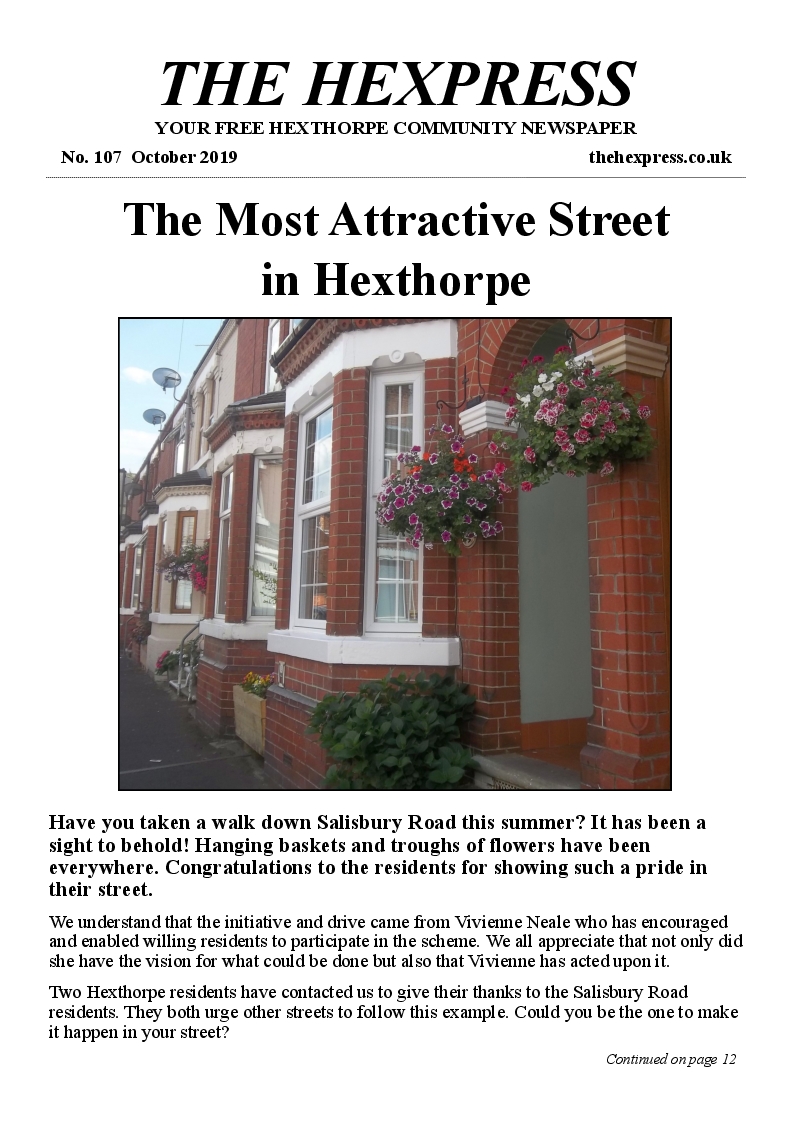 Your News and Comments Welcome

The Hexpress is for and of the community. We would love to hear from you with comments, news, events, letters or short articles of relevance to the Hexthorpe people.

We use cookies to ensure that we give you the best experience on our website.OKRead more